Type:
In the Field

Please send your contributions and any questions you may have to: 40th@ocasi.org

Dawit Beyene was involved with OCASI from the late 1980’s.
Read below for his recollections:

I first came to know OCASI 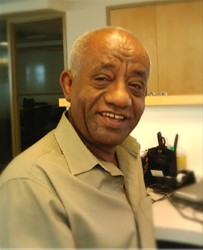 I first came to know OCASI in 1988 when I was working as the very first Executive Director of the Ethiopian Association in Toronto. It didn’t take me long to seek OCASI membership for the Association, and hence being directly and personally involved in OCASI’s work as a member organization.

A year later, I am not sure if it was my own boldness or that of the then OCASI E.D., Howy Sinclair Jones, I was hired as OCASI’s Funding Coordinator in 1989! Mind you, I was much more a mathematician than a funding or finance professional (had lectured mathematics at the Universities of Ottawa and Calgary a few years earlier!

Having OCAS’s funding grow significantly over a short period of time, we streamlined programs and operations within the organization shortly after I was hired, and restructured it for more efficiency and effectiveness.  It was then that Programs and Operations departments were established, at which time I was asked to lead the operations department as Operations Director, including the entire funding, finance and fundraising portfolio. Carrie Butcher got the Program Director position leading the program section following competitions. This was in 1990/91, which I believe was one of OCAS’s milestone and turning points as its influence in immigrant and refugee sponsorship and settlement issues grew significantly, not only provincially but also nationally.

Significant federal and provincial immigrant and refugee issue related policies and laws would not go through without OCASI’s important input and consultation by both the province and federal relevant ministries or departments.

OCASI was also on the Board of the CCR (and I was the official rep. for a number of years). Important refugee and immigrant settlement policies and bills (such as refugee sponsorship quota for Canada, i.e. number of refugees Canada would admit into the country per year, and immigrant settlement programs financed by the feds and the province were introduced and passed during that time).

My best memory of OCASI

The annual OCASI fundraising event was one of a kind during those times. Not that it raised that much funds compared to the organization’s annual budget, but its significance was really a show of its base support and its influencing and connecting power nationally and provincially. I think OCASI had over 120 membership base at that time (1991/92/930, and no member organization would miss this event for the world!!  Add to that what we then referred to as “Friends of OCASI” who would flock to the event in big numbers.  And, last but not least, were invited cabinet ministers from both the feds and the province, who probably wouldn’t dare not attending this event!! I believe we had Bob Rae himself right after his election as Ontario Premier!!! Could you imagine the ‘Spiel’ Anna Maria Menozzi and Howy Sinclair Jones, Chair of the OCASI Board and OCASI E.D respectively, would give at such an event!  They were tremendous!!!!

My most interesting encounter with/because of OCASI

At some point in 1994, Suzan Piggott, Director of Allocations at the United Way of Greater Toronto then, would pick-up the phone, call Howy, and asked him if he can loan her an ‘Allocations Manager’ who would replace one of her staff who took a year as maternity leave, and added she may extend it for another year. Next thing I recall is that I was an Allocations Manager at the United Way the following week or so!!! My Career path never looked back since - from the United Way to CPAR (Canadian Physicians for Aid and Relief in Toronto followed by Malawi), and then to Oxfam all over the world!!

I believe I gave OCASI sincere dedication, hard work, and commitment to the cause, which in turn helped me consolidate (and indeed sealed it off) my belief that the right of every one to be given the opportunity to pursue their dreams and happiness wherever they may be and regardless of their origin is an inalienable right and worth fighting for, which results in thriving individuals, peoples and nations, which Canada is an example of.

This latter is indeed one of the most important gifts I got from OCASI, over and above the concrete skills I added in exemplary senior leadership, critical decision making and inclusive team work skills.  Last, but definitely not least, OCASI gave a beautiful and lasting collegial friendship among almost the entire program and operations staff, as you will see vividly demonstrated in the attached!! This was after some 25 years (after) this amazing team left OCASI.  Isn’t this beautiful indeed!

OCASI’s work today is as significant and important as it was 25 years ago, if not more. So, do keep-up the good work, and I am sure the organization is still heard both provincially and federally as before. The hundreds of thousands of refugees and immigrants still need OCASI’s voice, and well deserve it too. I am sure the job is as difficult and as demanding as ever, but, I do also believe OCASI is cut (out) for it.

Share your story and help us build the Ontario archive of the immigrant and refugee-serving sector.

Don’t know where to start? Not sure how to tell your story? Here are some sample questions to help you get started:

Please share this callout widely across your organization and networks, with present and former staff, Board, volunteers and beyond.

We will be accepting submissions throughout 2018, and will host them online. Submissions received before October 2018 may be selected for presentation at the OCASI Gala.

Please send your contributions and any questions you may have to: 40th@ocasi.org