A unique resource written by Immigrant Women across Ontario aimed at preventing sexual violence is now more accessible to thousands of women in Ontario immigrant and refugee communities. 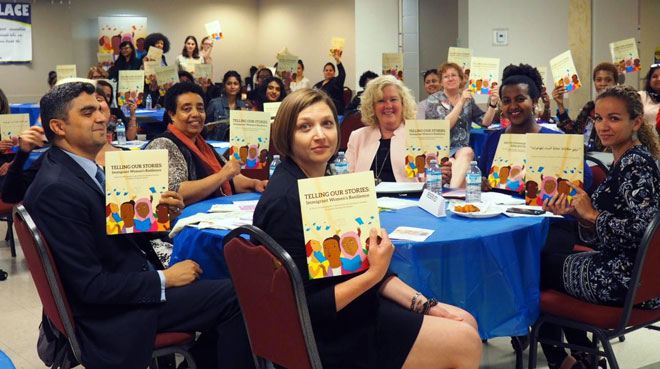 On Thursday June 29th, 2017 the new multilingual editions of the graphic novel was launched by The Ontario Council of Agencies Serving Immigrants (OCASI) and Le Mouvement Ontarien des Femmes Immigrantes Francophones (MOFIF) with the support of Interim Place in Brampton, Ontario. The novels, which were first published in English and French, will now also be available in nine other languages including Urdu, Punjabi, Dari, Arabic, Tamil, Armenian, Somali, Chinese, and Spanish. They are part of a provincial-wide public education campaign funded by the Ministry of Citizenship and Immigration that focusses on finding ways to help prevent sexual violence in Ontario. The novel features four stories written by immigrant women participating in writing workshops across Ontario and includes discussion questions for educators and focuses on important themes that challenge perceptions of victim blaming; enhance knowledge about consent culture; highlight the importance of supporting survivors; and respond to workplace sexual harassment.

"Now that "Telling Our Stories: Immigrant Women's Resilience" is available in multiple languages, we hope it helps mobilize even more community members to take action to respond to and end sexual violence and violence against women," said Debbie Douglas, Executive Director, OCASI. "We hope that the novel is useful for frontline service providers to use in community education and for community members to use in discussion on how to provide support to survivors."

The event brought in crowds of 50 to 60 people and featured speakers, powerful singing and spoken word performances by Adri Almeida and Renee McPhee, a land acknowledgement and indigenous closing from a Peel Aboriginal Network representative and a reading of the graphic novel by one of the participants who had helped write one of the stories. 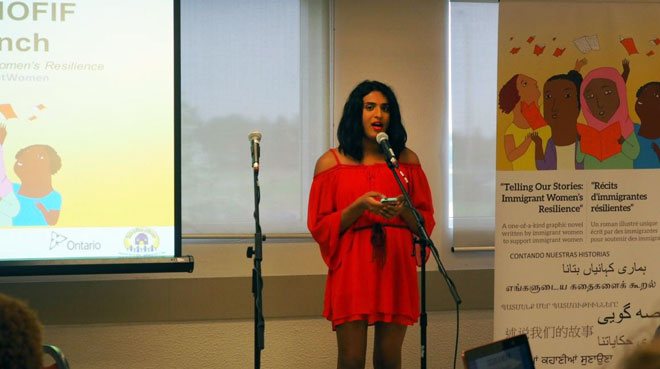 Adri Singing a Song to open the event 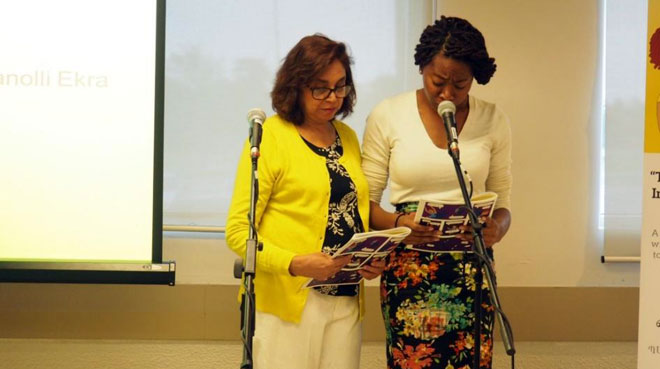 Also in attendance of three representatives from the Ministry of Citizenship and Immigration, including Tariq Ismati the Director of Refugee Resettlement Secretariat who also introduced a personalized video message about the event from Minister Albanese. They both spoke about the importance of the graphic novel and the necessity for such resources and initiatives in the community. 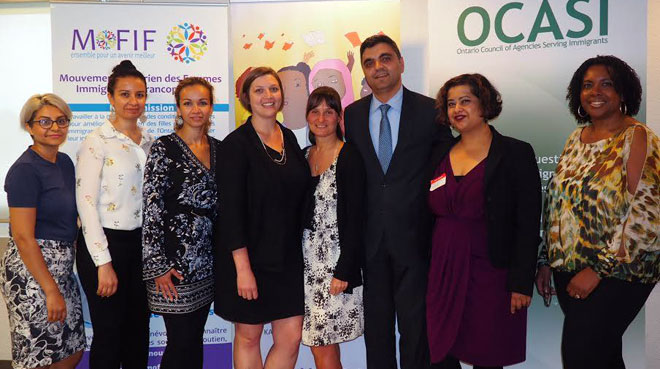 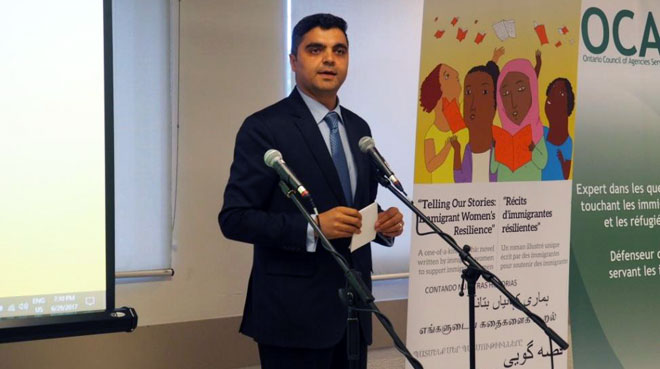 "By speaking out about violence, these immigrant women tell us powerful and compelling stories that will help other women in their community and around the world. Their personal experience will be invaluable in bringing violence against women to an end" said Laura Albanese, Minister of Citizenship and Immigration. 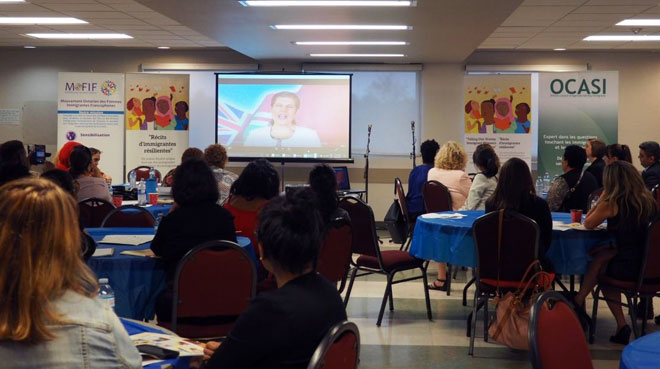 The event was hosted by Anu Radha Verma a Peel local who has been active in Violence Against Women work for many years and Fayza Abdullai the President of MOFIF. The evening was very powerful and we were fortunate to have had many community members as well as settlement workers from Peel in attendance.

"Within the Francophone community, we have seen tremendous response from the graphic novel! It's created connections with the public as it is attractive, innovative and available in French, their preferred official language - and in many cases their own mother tongue. Since its launch, Récits d'immigrantes résilientes has done a lot to start conversations about preventing sexual violence and raising awareness among Francophones across Ontario" said Fayza Abdallaoui, President, MOFIF.

"Punjabi and Urdu are among our top home languages in Peel Region. We have a great deal of linguistic diversity and it is imperative that tools and resources like "Telling Our Stories: Immigrant Women's Resilience" are made available to women and their families in their first language," said Interim Place, Executive Director Sharon Floyd, "When women ave access to resources in their first language, it sends a message that; you belong, you are not alone and you matter. We're glad that counsellors and settlement workers in Peel Region will now have a resource to begin a conversation that may otherwise for many reasons not take place."

The novels are free of charge and will be distributed in newcomer communities through settlement agencies, reception houses, and organizations working with newly arrived refugees, as well as universities, places of worship, and other venues in Ontario. 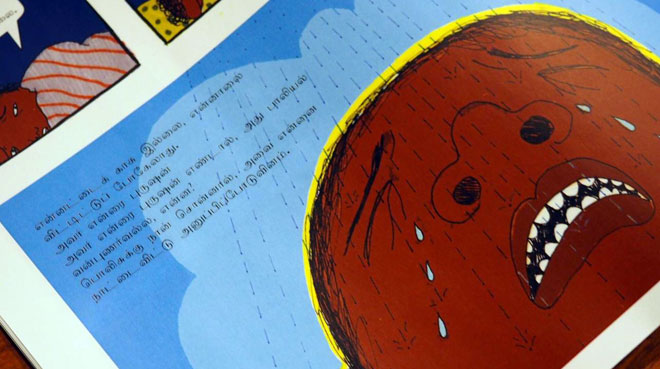 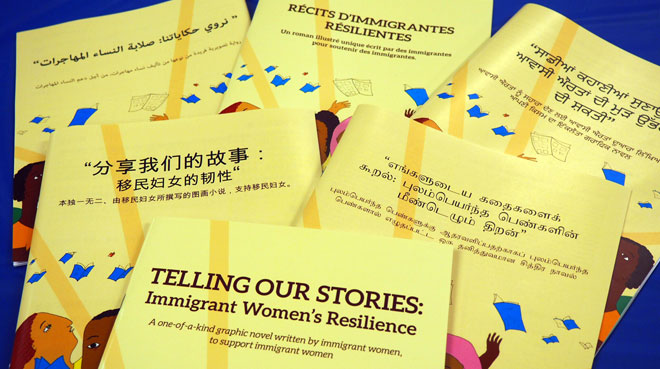 To order a copy of the novel, fill out the order form at https://www.surveymonkey.com/r/9GTDM68

To support us and to find out where the next launch will be, follow us on social media at hashtag: #4ImmigrantWomen or email us at vaw@ocasi.org